skip to main | skip to sidebar

The Emergency Chicagoland Commodore Convention was a great success with Commodore, Atari, Apple, CoCo, Amiga, Texas Instruments, and IBM enthusiasts converging together this weekend. "fill your day with 64K!" was a quote from the invite. After attending both days, 64K was in the agenda!

I also loved the Raspberry Pi setup, the 1950s UNIVAC and soviet-era computers.

The Vintage Computer Festival Midwest 7.0 was held in the same facility with ECCC. Stacks of Apple II's lined the wall, next to Atari ST's, Sun Workstations, and analog computers like the UNIVAC II (1958). I received a demo of the symbolics Mac ivory 2 computer (LISP) workstation. A motherboard was on display, running an OS called Symbolics Genera 8.3.

The Portland Commodore Users Group attended with their Comet64 Internet Modem, starting at $49.99, the modem uses RS-232 to:

Vendors from around the US and Canada attended, with new technology making these old computers fun to compute with.

There was classic games and consoles on sale along with new hardware and software. 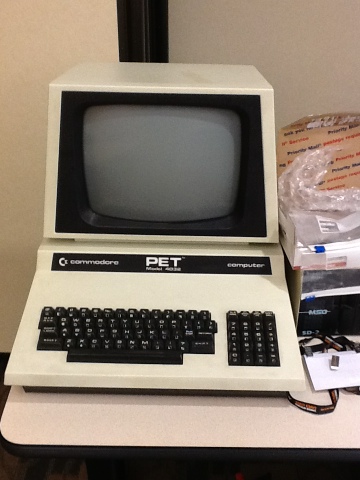 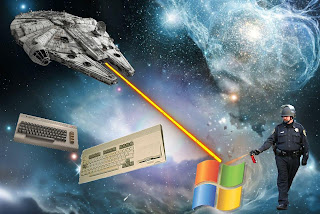 Top 10 Reasons to Switch to Commodore Computers
- by Captain Video

10. You close your eyes at night and see the Blue Screen of Death: STOP 0xC000021A Fatal System Error.

9. Best Buy advertises "crash" and "boot" as a form of multitasking.

8. You decide to revert back to Windows95.

7. You start to rationalize dusting off that old 386 dx computer in the garage.

6. You believe that sealing your windows at home will keep the bugs out.

5. Your idea of a Saturday night is using your deinstaller...

4. You still have a grudge with Apple for firing Steve Jobs.

2. x86 is like that annoying neighbor who just wont leave.

Commodore 64 Users who want to expand the sound capabilities have a new option. Adding a second SID to your 64 & 128 is as simple as it can be, insert your Commodore 6581 SID (not included) into the empty socket and plug into your Commodore 64. The interface works with any software which access between the $DE00 to $DFE0 address range (the address can be changed by moving a few simple DIP switches). Sized to fit standard Commodore 64/128 case shells (such as those sold by Protovision or Vesalia Online). Commodore 6581 SID is not included.

"The designer of the SID Symphony II, Vanessa Ezekowitz, was kind enough to furnish me with circuit diagrams of her SID expansions. There are internal and external expansions available, from her website Digital Audio Concepts:

There are reports of a SID Symphony II cartridge, being sold by an ebay and are not to be confused fir the real Sid II.
Posted by C64 MUSIC at 7:17 PM No comments:

Commodore competing with Google? You betcha! Enter Commodore 8 Bit Search engine, currently searching through 1557354 files (1166 GB) spread on 22 servers. You can find Commodore files for the 64, C16, VIC-20, Plus/4, C128 and the list goes on and on. Started by Shane Wood, the project has taken countless hours of coding and is a true testament to the viability of the Commodore in the 21st century.

Take it for a spin and tell your 8 bit friends:

Computer history in the making.

11.11.11 was the historic day when Commodore USA rose like a phoenix, ushering forth a new OS that die hard C64 and Amiga fans have been waiting for. The screenshots of Commodore OS Vision show the beauty of the OS, modern in design, internet friendly, with the ability to program your own Commodore games, play classic games like Tron, Space Invaders, design graphics, edit movies, create music or program in BASIC, Amiga, Java, C/C++, PHP, Perl, VB.NET, C#, Python, Linux, HTML and much much more.

Windows 8 step aside. Android move over. iOS take notice. The Legend is back, and with over 17 million units sold in the 1980s, Commodore is the best-selling personal computer of all time.

According to Commodore USA:

"Commodore OS Vision is a 64-bit Linux distribution, based on Linux Mint, created for Commodore enthusiasts purchasing Commodore USA hardware, such as Commodore 64, VIC series and the upcoming high-performance line of Amiga computers. These are essentially restore disks for pre-installed Commodore systems. Commodore OS Vision uses the classic GNOME 2 interface and features extensive Compiz/Emerald desktop effects. It includes dozens of games of all genres (FPS, Racing, Retro etc), the Firefox and Chromium web browsers, LibreOffice, Scribus, GIMP, Blender, OpenShot and Cinellera, advanced software development tools and languages, sound editing through Ardour and Audacity, and music composition programs such as the Linux MultiMedia Studio. It has a classic Commodore slant with a selection of applications reminiscent of their classic Amiga counterparts." 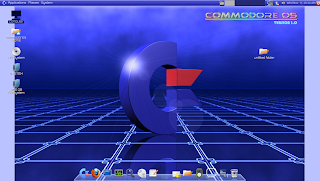 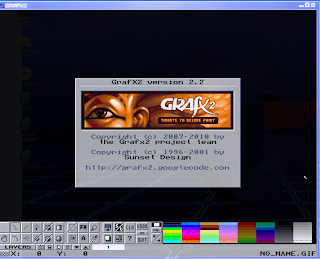 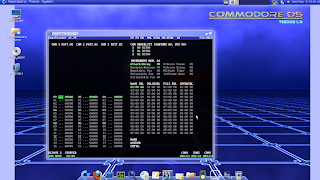 Yesterday we reported that Commodore USA released their new Commodore OS Vision. See our 11.11 11 post. Both discs are over 3.3 Gb.

You can read more about the OS on:

http://www.commodore-amiga.org/en/forum/8-commodore-os-howto-and-help/9542-commodore-os-vision-disc-2-now-available-for-download
Posted by C64 MUSIC at 5:54 AM No comments:

This is a truly historic and momentous day! The first OS by Commodore has been posted online as a free download. The release of Commodore OS Vision is a game changer, which will definitely be in the running with Android, iOS, and Windows 8.

A beta of OS Vision is ready for download. Here is the web page that has the Torrent Link:

While anyone can download/use, it has only been tested for the Commodore VIC and C64x product line(s).

Commodore OS Vision is a community driven Linux distribution for Commodore enthusiasts that is designed to unleash your creative potential and help you enjoy your computing experience to the fullest. Commodore computers were well known for their unique operating environments, so we seek to do the same, by providing a distinctive, attractive, advanced and fun operating system experience. Its look is inspired by the Commodore 64 and original Commodore Amiga Workbench user environments but with a modern spin, which includes many slick graphical effects which showcase the capabilities of our new Commodore machines.

The Commodore OS Vision project was created as an operating system option for Commodore enthusiasts purchasing Commodore USA computers. It is but the first step on the path to creating the ultimate Commodore experience for our customers. This retro-futuristic OS experience takes design cues in its appearance from classic Commodore and Amiga operating systems and evolves them further to create a distinctive and modern 21st century look which adds personality to our new Commodore machines. The selection of software included also has a retro slant which would be familiar to many Commodore fans, making them feel at home. It features the latest iteration of the classic Gnome 2.x user interface, which many prefer for its simplicity, stability and straight forward access to applications.

Commodore OS Vision stands on the shoulders of giants, with a lineage that traces back to fantastic linux operating system distributions such as Debian, Ubuntu and Mint, which you might also be interested in installing on our machines. Commodore OS Vision auto-installs a graphical operating system boot menu facilitating this further, making your new Commodore machine a technology tinkerers delight.